The 1954 Brown v. Board of Education case overturned the 1896 Plessy v. Ferguson ruling in which the Supreme Court said racial segregation in separate but equal facilities met the 14th Amendment's requirement for equal protection under the law.

After initial successes in challenging public universities that had excluded African Americans from law schools, the NAACP turned to desegregating primary and secondary education in the early 1950s. The NAACP lawyers were led by Thurgood Marshall, who later became the first African American to serve on the Supreme Court. In December, l952, the United States Supreme Court had on its docket cases from Kansas, Delaware, the District of Columbia, South Carolina, and Virginia, all of which challenged the constitutionality of racial segregation in public schools. The Court consolidated these five cases under one name, Oliver Brown et al. v. the Board of Education of Topeka.

Hayes, Marshall, and Nabrit following the Brown decison.
One of the justices later explained that the Court felt it was better to have representative cases from different parts of the country. They decided to put Brown first "so that the whole question would not smack of being a purely Southern one." Marshall and his colleagues, George E.C. Hayes and James Nabrit, argued that states had no valid reason to impose segregation, thatracial separation - no matter how equal the facilities - caused psychological damage to black children, and that "restrictions or distinctions based upon race or color" violated the equal protection clause of the Fourteenth Amendment. Lawyers for the states argued that Plessy was correct: as long as accommodations were "equal," segregation itself hurt no one. They predicted dire consequences of integrated education, particularly in a South accustomed to segregation.

In September 1953, with oral arguments a month away, Chief Justice Fred Vinson died in his sleep. President Eisenhower nominated California Governor Earl Warren to replace Vinson. In 1952, Warren helped secure Eisenhower's nomination for President by controlling the California delegation at the Republican convention that year. Eisenhower had promised Warren the first open seat on the Court, and Warren considered that pledge to include any opening, including the Chief Justice's seat. At the end of September 1953, with Congress no longer in session, Warren was given a recess appointment to the Court. The Senate confirmed him as the 14th Supreme Court Chief Justice on March 1, 1954.

Library of Congress, New York World-Telegram and Sun Photograph Collection, Prints and Photographs Division. Courtesy of AP/Wide World Photo
It was under Warren's leadership that the court came to a unanimous decision in the Brown v. Board of Education case on May 17, 1954: "We conclude that, in the field of public education, the doctrine of 'separate but equal' has no place. Separate educational facilities are inherently unequal." The decision not only overturned the "separate but equal facilities" doctrine, but also provided the legal foundation of the Civil Rights Movement of the 1960s. The Supreme Court's Brown v. Board of Education decision did not abolish segregation in other public areas, such as restaurants and restrooms, nor did it require desegregation of public schools by a specific time. It did, however, declare the permissive or mandatory segregation of public schools that existed in 21 states unconstitutional.

Items owned by Perry Library will have their call number following the citation. 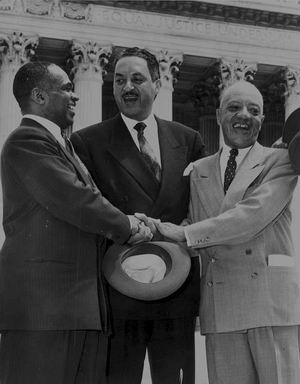 More information on Brown v Board of Education

The Virginia Heritage Task Force of the Virtual Library of Virginia has assembled a listing of primary materials related to Brown v Board of Education held by member libraries.