For Women's History Month 2014, the ODU Libraries followed the National Women’s History Project in honoring women who represent "a wide-range of occupations and accomplishments."

An exhibit in the Learning Commons of the Perry Library features images and biographical information in addition to books available in the ODU Libraries. 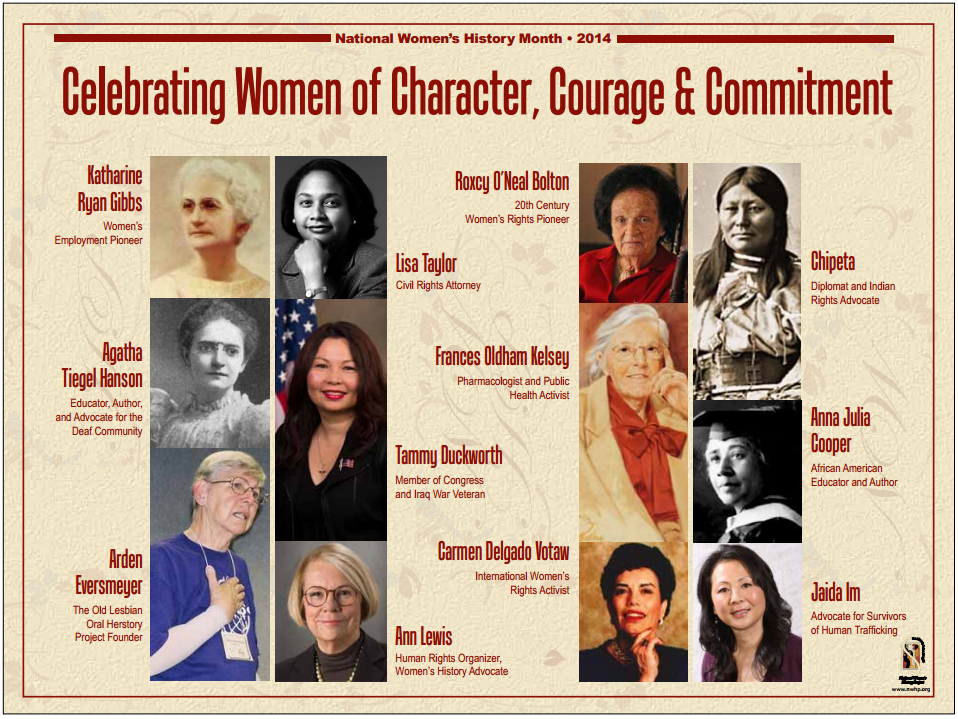 Chipeta was a wise and outspoken advisor to her husband, a Ute Indian leader. Born into the Kiowa Apache tribe in the 1840s, Chipeta was raised by the Uncompahgre Ute tribe in what is now western Colorado. In her teens she wedded Ouray, who became a powerful Ute chief during the often violent and brutal times of western settlement. Chipeta was a peacemaker who did not consider all settlers to be the enemy, often giving food to starving white families. In 1879 when her tribe was about to start a war with settlers, Chipeta successfully convinved Chief Ouray to call off all fighting, arguing the war would be devastating to the Utes.

Anna J. Cooper was an author, educator, speaker, and among the leading intellectuals of her time. Born into enslavement, she wrote “A Voice from the South,” widely considered one of the first articulations of Black feminism. Throughout her long life, Cooper worked for the betterment of African American women’s lives, which she saw as the foundation for a more just society for everyone. Cooper worked at Washington D.C.’s M Street — now Dunham High School — for nearly 40 years, focusing the all black high school on preparing students for higher education, successfully sending many students to prestigious universities.

Agatha Tiegel Hanson was a teacher, poet, and advocate for the deaf community. Unable to hear and blind in one eye from a childhood illness, she never allowed her disabilities to hold her back. She came of age at a time when most deaf people were denied access to education, and deaf women especially had few educational options. She was among the first women admitted to Gallaudet University, which is still the only college in America dedicated to the education of deaf and hard of hearing students. Graduating first in her class, her valedictorian speech argued for the recognition of the intellect of women, a cause she advocated throughout her life.

Katharine Ryan Gibbs founded Katharine Gibbs School in 1911 to provide women with high-level secretarial training and the opportunity to earn their own incomes. Gibbs was a mother and housewife for much of her life, until she was widowed at 48 and left with no means to support herself or her two sons. Teaming up with her sister, Mary Ryan, they purchased a failing Providence, Rhode Island secretarial school in 1911. Her school quickly expanded, opening branches near many ivy-league universities. At a time when educated women were generally expected to become teachers or nurses, Katharine Gibbs School offered women an exceptional secretarial education and new opportunities, which made skilled office work a realistic career for women.

Frances Oldham Kelsey as a Food and Drug Administration’s (FDA) pharmacologist refused to approve thalidomide, a drug that was later proved to cause severe birth defects. The thalidomide crisis brought to light inadequacies in both drug clinical trials and the FDA’s approval process, leading Congress to pass legislation giving the FDA more power and requiring manufacturers to disclose side effects. Dr. Kelsey continued her work at the FDA, directing the surveillance of drug testing, until her retirement in 2005 at age 91. In 2010 the FDA established the Frances Kelsey Award, an annual award given to a staff member for their commitment to scientific rigor.

Roxcy O’Neal Bolton is a lifelong advocate for women’s rights. She is the founder of Florida’s first battered women’s shelter and the nation’s first hospital-based Rape Treatment Center. Her extensive work also includes convincing National Airlines to offer maternity leave to (instead of firing) pregnant flight attendants, lobbying for passage of the Equal Rights Amendment (ERA), and persuading the National Oceanic and Atmospheric Administration to name hurricanes after both women and men. Bolton led the effort to create the Women’s Park in Miami, which opened in 1992 as the first outdoor space in the nation– honoring past and present women leaders.

Arden Eversmeyer founded the Old Lesbian Oral Herstory Project (1999), to ensure that the stories of lesbians born in the first part of the 20th century, who were labeled “mentally ill”, fired from their jobs, rejected by their families, and even raped and murdered with impunity, are recorded in history. Project volunteers have documented over 320 diverse life stories recording the sacrifices and obstacles faced by lesbians of that era. The collection is now archived, and continues to grow, as part of the prestigious Sophia Smith Collection at Smith College. Today Eversmeyer is proud to live in a time when she can be her true self with acquaintances, friends, family, medical professionals, and everyone.

Carmen Delgado Votaw is a leading advocate for women’s rights both nationally and internationally. She served on the International Women’s Year Commission, collaborated with all United Nations Conferences on Women, and significantly influenced the advancement of women in Latin America. Born and raised in Puerto Rico and inspired to fight for social justice by Martin Luther King Jr. and the 1963 March on Washington, she has worked for over 50 years for the betterment of women, children, Latinos, and other minorities throughout the world. In 1996, she wrote “Puerto Rican Women,” a bilingual women’s history book. She received the Veteran Feminists of America Medal of Honor in 1999.

Ann Lewis is a leader of progressive political reform focusing on the importance of personal engagement, social justice and women’s rights. She served as a White House Communications Director, is a national commentator on public policy, and champions the recognition of women’s history. Ann Frank Lewis grew up in a Jewish family who witnessed the Holocaust and its aftermath. Growing up with the name Ann Frank, she says “my parents, who talked often about current events, taught me how fortunate we were to live in a democracy, where we could choose our leaders. I would never take our political rights for granted.”

Jaida Im founded Freedom House, the first residential shelter for adult female survivors of human trafficking, in Northern California in 2010. Im left her 20-year career as a health care professional to found the non-profit organization. Under her direction, the program offers holistic case management, counseling, educational resources, and job training for victims of abduction and enslavement. In fall 2013, Freedom House opened The Nest to serve girls ages 12-17. This new shelter provides a space to help girls to recapture their interrupted youth in a loving family setting.

Tammy Duckworth, U.S. Representative from Illinois, is an Iraq War veteran and former Assistant Secretary of Veterans Affairs. In 2012, she became the first disabled woman elected to serve in the House of Representatives. Duckworth has a strong record advocating and implementing improvements to veteran’s services. In 2004, she was deployed to Iraq as a Blackhawk helicopter pilot. She was one of the first Army women to fly combat missions during Operation Iraqi Freedom until her helicopter was hit by an RPG on November 12 2004. She lost her legs and partial use of her right arm in the explosion and was subsequently awarded a Purple Heart for her combat injuries.

Lisa Taylor is a leading civil rights trial attorney who has worked for over twelve years to ensure that civil rights laws are enforced around the country. Working with the Department of Justice, Taylor focuses primarily on educational and disability law and shows an unwavering commitment to ending discrimination and promoting equality and justice. Lisa was in Naval ROTC as a student and served as an officer aboard the USS Tarawa, where she developed the ship’s first program to address sexual harassment. Taylor became a lawyer out of a strong desire to serve those who could not serve themselves.