The 2013 Honorees represent a remarkable range of accomplishments and a wide diversity of specialties including medicine, robotics, computer programming, atmospheric chemistry, architecture and primatology. These women’s lives and work span the centuries of American history and come from different cultural and ethnic backgrounds. We are proud to honor them and all women seeking to advance these important fields.  NWHP

An exhibit in the Learning Commons of the Perry Library features images and biographical information in addition to books available in the ODU Libraries. 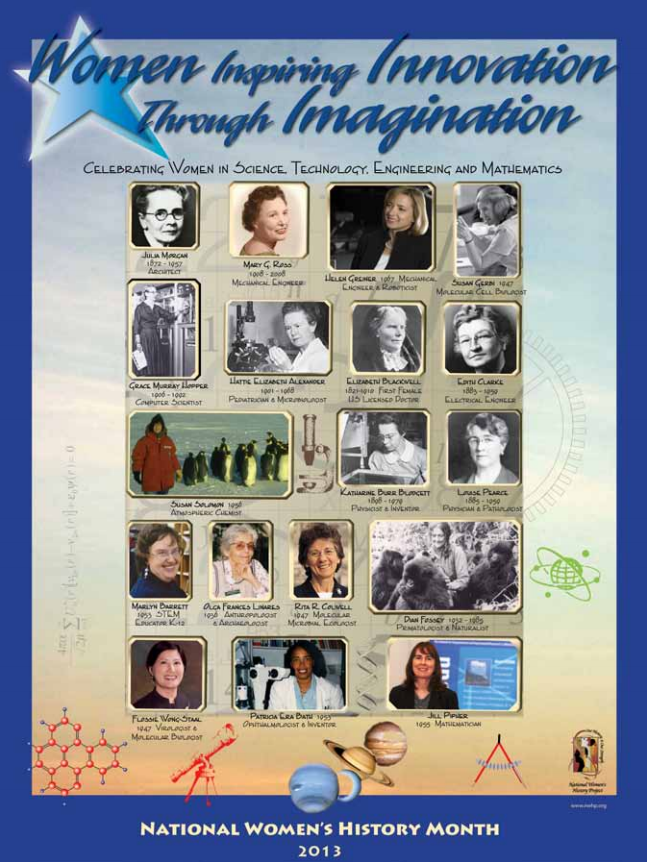 Hattie Elizabeth Alexander (1901–1968) Pediatrician and Microbiologist Hattie Alexander developed the first effective remedies for Haemophilus influenzae, reducing the mortality rate from nearly 100 percent to less than 25 percent. Alexander was also among the first scientists to identify and study antibiotic resistance, which she correctly concluded was caused by random genetic mutations in DNA. In 1964, she became the first woman elected president of the American Pediatric Society.

Marlyn Barrett (1954) K-12 STEM Educator Marlyn Barrett is a coordinator of science instruction for Worcester County Public Schools and a project director for a grant which provides professional development for 135 teachers in 14 counties throughout Maryland. Her responsibilities include directing the grant, meeting with other county coordinators and higher education partners, and teacher training, impacting thousands of Maryland students and inspiring them to become the future of science.

Patricia Era Bath (1942) Ophthalmologist and Inventor Patricia Bath’s invention of the Laserphaco Probe was an important milestone in the advent of laser cataract surgery. Bath co-founded the American Institute for the Prevention of Blindness (1976) committed to “protect, preserve, and restore the gift of sight.” She broke ground for both women and African Americans in medicine and ophthalmology, including being the first African American woman doctor to receive a patent for a medical purpose.

Elizabeth Blackwell (1821–1910) Physician Elizabeth Blackwell was the first fully accredited female doctor in the United States. She, along with her sister, Emily, founded the first medical school for women, resulting in greater acceptance of female physicians, more opportunities for meaningful work for American women, and stricter standards for medical schools as a whole.

Katharine Burr Blodgett (1898–1979) Physicist and Inventor Katharine Blodgett was the first woman awarded a Ph.D. in Physics from the University of Cambridge (1926) and the first woman research scientist for General Electric’s Schenectady, New York laboratory (1920). Blodgett received eight US patents, most famously for inventing low-reflectance “invisible” glass. The legacy of her work is still seen today in camera lenses, computer screens, eyeglasses, and many other applications.

Edith Clarke (1883–1959) Electrical Engineer Edith Clarke was the first woman to earn an M.S. in electrical engineering from Massachusetts Institute of Technology (1919) and the first woman professor of electrical engineering in the US (University of Texas at Austin 1947). Before teaching, Clarke worked much of her career as an engineer for General Electric. She invented the Clarke Calculator, a graphical device for solving power transmission line equations, and is also well known for authoring an influential textbook on power engineering.

Rita R. Colwell (1934) Molecular Microbial Ecologist and Scientific Administrator Rita Colwell, Ph.D. served as the first woman Director of the National Science Foundation (1998-2004), where she exemplified the importance of STEM education by her leadership in K-12 STEM education, graduate STEM education, and the increased participation of women and minorities in science and engineering. Colwell has also served in many leadership and advisory positions for scientific organizations and government agencies. Her award-winning scientific work is focused on water borne diseases of public health significance.

Dian Fossey (1932–1985) Primatologist and Naturalist For 18 years Dian Fossey studied, lived amongst, and befriended the gorillas of Rwanda. Fossey made many discoveries about gorillas including understanding gorilla vocalizations, gorilla group hierarchies and social relationships, and gorilla diet and recycling of nutrition. Her book, Gorillas in the Mist (1983) documented her intense study of these animals and the need to protect them from the constant threat of poachers and neglect.

Susan A. Gerbi (1944) Molecular Cell Biologist Susan A. Gerbi is the George Eggleston Professor of Biochemistry at Brown University, where her research team devised a method to map the start site of DNA replication at the nucleotide level. Her current research suggests that a steroid hormone receptor may play a direct role for regulating the initiation of DNA replication, with potential significance to understand the role of hormones in certain cancers. She also studies eukaryotic ribosomes, the cellular factories for protein synthesis.

Helen Greiner (1967) Mechanical Engineer and Roboticist Helen Greiner is co-founder and former President/Chairman of iRobot Corporation, a world leader in consumer and military robots, and current CEO of CyPhyWorks. She is also a Trustee of the Massachusetts Institute of Technology (MIT) and the Boston Museum of Science (MOS), serves on the Robotics Advisory Board of Worcester Polytechnic Institute (WPI) and Army War College (AWC), and is a member of the Army Science Board (ASB).

Grace Murray Hopper (1906–1992) Computer Scientist Grace Hopper was a pioneering computer scientist and Rear Admiral in the United States Navy. Hopper joined the Navy Reserve during World War II and worked as one of the first programmers of the Harvard Mark 1 Computer. She later wrote the first computer programming compiler (1952) and conceptualized COBOL, on of the first modern programming language (1954). Upon her retirement she was awarded the Defense Distinguished Service Medal, the highest non-combat award given by the Department of Defense.

Olga Frances Linares (1936) Anthropologist and Archaeologist Olga Linares is a senior staff scientist (emerita) at the Smithsonian Tropical Research Institute. Her work centers on the social organization and agrarian practices of the Jola peoples living in the Casamance region of Southern Senegal. Formerly, she also did research on the archaeology and ethnography of Central America.

Julia Morgan (1872–1957) Architect Julia Morgan was the first woman admitted to the architecture program at l’École nationale supérieure des Beaux-Arts in Paris, and the first woman architect licensed in California. Morgan designed over 700 buildings in California and is best known for her work on Hearst Castle in San Simeon. Many of her projects, including designing numerous YWCA buildings and facilities at Mills (women’s) College, sought to advance opportunities for women.

Louise Pearce (1885–1959) Physician and Pathologist Louise Pearce was a physician and pathologist with the Rockefeller Institute. Pearce worked on the team that found a cure for African Sleeping Sickness (1919) and made a solo trip to the Belgian Congo to test the new drug (1920). From 1923 until her retirement in 1951 she researched susceptibility or resistance to infection with Dr. Wade Hampton Brown. Their discovery of a transplantable rabbit tumor was studied in cancer laboratories around the world.

Mary G. Ross (1908–2008) Mechanical Engineer Mary Ross was the first woman engineer at Lockheed’s Missiles Systems Division (1952), and the first known Native American woman engineer. At Lockheed, Ross designed missiles and rockets, and developed systems for human space flight and interplanetary missions to Mars and Venus. After retiring, she began a second career as an advocate for women and Native Americans in engineering and mathematics.

Susan Solomon (1956) Atmospheric Chemist Susan Solomon is the Ellen Swallow Richards Professor of atmospheric chemistry and climate science at the Massachusetts Institute of Technology. Her groundbreaking research on chlorofluorocarbons (CFCs) as the cause of the Antarctic ozone hole was part of the basis of the international treaty that has effectively regulated damaging chemicals. She is also a leader in climate science, and is best known for seminal work showing that climate changes due to human increases in carbon dioxide will last for more than a thousand years.

Flossie Wong-Staal (1946) Virologist and Molecular Biologist Flossie Wong-Staal is one of the world’s foremost authorities in the field of virology. Wong-Staal was a pioneering researcher of retroviruses and with her team deciphered the structure of the HIV virus as the cause of AIDS. She was the first to clone and complete the genetic mapping of HIV making it possible to develop HIV tests. Wong-Staal continues her pioneering work in developing first-in-class therapeutics against Hepatitis C virus.